Despite the government’s push for digital payments after demonetisation sucked 86 percent of currency in circulation out of the economy, data for the last two months may not enthuse many. While the number of digital transactions has jumped multi-fold, the total value of non-cash payments declined 12 percent in December compared to the average of April to October.

The decline came largely on a slump in the value of amount transferred through the real-time gross settlement system, which is used for transactions above Rs 2 lakh. The value of RTGS transfers was Rs 84 lakh crore last month, about 20 percent lower than the monthly levels seen in September and October. The RTGS transactions were at their highest level in June at Rs 106 lakh crore.

The Reserve Bank of India had on December 2 announced that it will publish data on different payment systems every day. The data, though sourced from a limited number of banks and payment players, is representative of the industry, the central bank had said.

“These (RTGS) are generally high-value transactions” and there are multiple explanations for the fall in the value of non-cash transactions, according to Manju Agarwal, Deputy Managing Director at State Bank of India. The most plausible reason “could be that businesses have taken a hit post demonetisation. Digital transactions on the whole have gone up,” Agarwal told BloombergQuint. 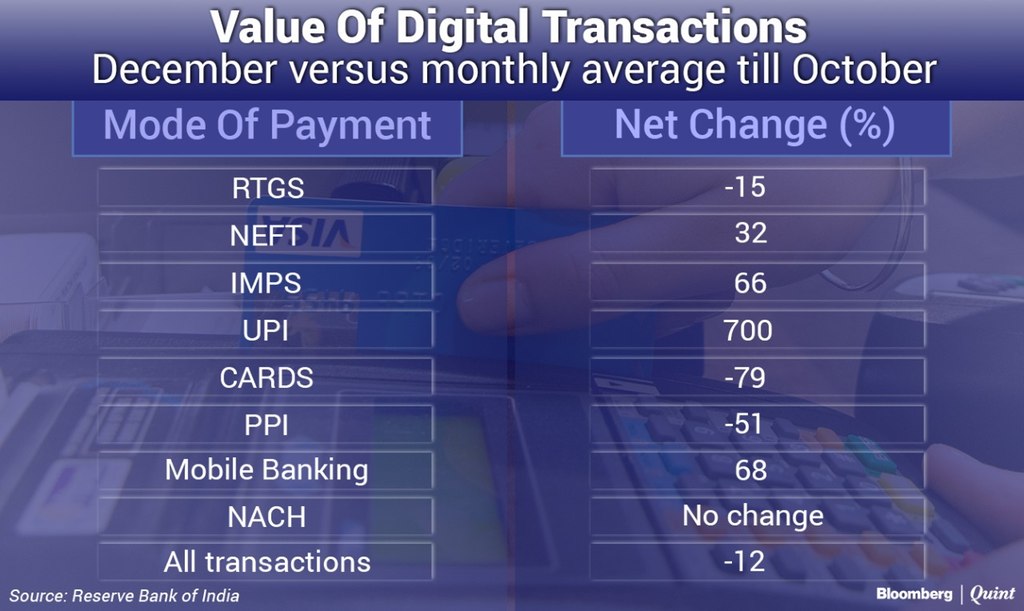 Total value of transactions through non-cash modes actually declined 12 percent in December compared to the average observed during the months of April to October.

On the other hand, the national electronic funds transfer (NEFT), similar to RTGS but usually used by individuals to transfer amounts smaller than Rs 2 lakh per transaction, saw a healthy 32 percent spike in value in December as compared to the April-October average.

NEFT was, however, among the few modes of payment that saw a jump in transaction value. Prepaid instruments such as mobile wallets, prepaid cards and paper vouchers witnessed a 51 percent decline in value in December. Credit and debit card transactions declined by a hefty 79 percent as compared to the average of previous months, while transfers through the national automated clearing house remained flat.

The cap on ATM withdrawals, which make up the bulk of total card transactions in India, may have also contributed to lesser volumes in December.

The government and payment companies claim the number of digital transactions spiked across the board in December. BloombergQuint had earlier reported how the average transaction size across all digital modes of payment has come down because of more people transacting online.

The dip in transaction value for prepaid instruments in November-December could be on account of people’s cash-flow position, said Naveen Surya, Managing Director of Itz Cash Card Ltd.

In November, cash crunch delivered a blow to business in the economy as consumers deferred purchases. Some amount of transactions moved online but almost all payment modes registered decline in both volume and value of transactions. Experts say it’s only in December that transactions started recovering again.

There were a variety of reasons for the fall in spending and people without cash in their banks weren’t transacting at all. Even those who had money in digital form cut down on their purchases, so retail transactions through digital mediums may have declined. Naveen Surya, Managing Director, Itz Cash Card Ltd

Surya said the reason behind the apparent decline in prepaid payment instruments is because the latest set of the RBI data doesn’t capture non-commercial transactions which make up a bulk of their business.

“It’s a Rs 6,000-crore industry and only 30 percent of it involves customer-to-merchant transactions; the rest are money transfers which aren’t counted here but in IMPS, which saw a jump,” he added.

The high figures quoted by certain wallet companies are exaggerated because of fewer transactions across the economy and the true picture will only emerge in the next few months, another industry expert told BloombergQuint on the condition of anonymity.

The Unified Payments Interface saw a sharp spike in its usage in December after getting off to a slow start. UPI transactions jumped almost seven-fold in a matter of a month, according to the RBI data. The value of transactions through UPI stood at Rs 700 crore in December, still minute compared to cards and prepaid wallets.